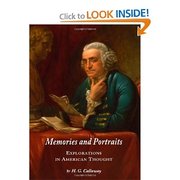 In 'Memories and Portraits, Explorations in American Thought', philosopher H. G. Callaway embeds his distinctive contextualism and philosophical pluralism within strands of history and autobiography - spanning three continents. Starting in Philadelphia, and reflecting on the meaning of home in American thought, he offers a philosophically inspired narrative of travel and explorations, in Europe and Africa, illuminating central elements of American thought - partly out of diverse foreign and domestic reactions and fascinating cultural contrasts. The book is of interest for the contemporary interplay of analytic philosophy with American pragmatism and for those focused on the interaction of European and Anglo-American thought and society. In this book, the formalism of analytic philosophy encounters a logically articulate version of the contextualism implicit in the pragmatist tradition; and a deep and abiding interest in natural science is augmented by a more literary account of the social and cultural contexts of inquiry - encountered in many years of travel and life abroad. The final chapter, employing a methodological naturalism, brings the perspectives and lessons, from near and far, back home for renewed reflection.

Dr. H.G. Callaway, a native of Philadelphia, PA, has published widely in philosophy of language, and in the area of American philosophy, including Context for Meaning and Analysis (1993), Meaning without Analyticity (2008), American Ethics: A Source Book from Edwards to Dewey (2000) and recent editions of R.W. Emerson, The Conduct of Life (2006) and William James, A Pluralistic Universe (2008). H.G. Callaway holds a doctorate in philosophy and has taught in various American and European universities and at the University of Ibadan in Nigeria.