Hello First U Family! I'm back from Portland and I wanted to share with you my experience at GA. Many of you have expressed interest in attending GA in the future so I wanted to offer a summary of what you can expect, as well as share with you highlights from this year's assembly. Without further ado, here is my list of 10 Things You'll See at GA...

As a person who is a member of three oppressed populations, I take matters of equality very seriously. That being said, I was delighted to see the extent to which the General Assembly coordinators went to ensure everyone – regardless of difference or limitation - would be able to enjoy the programming. Closed captioning for sermons, hymns sung in both English and Spanish, and an accessibility booth to address mobility issues are just a few examples of the inclusivity shown at GA. It was enough to make a Unitarian’s heart happy.

9.  Hippies. It’s no secret that our liberal faith draws a disproportionate number of Volvo driving, tea-drinking, Teva-wearing treehuggers. It also turns out that a lot of Unitarians don’t like wearing shoes. At a workshop entitled “Be a Hummingbird: A Multigenerational Workshop on Trees” (so Unitarian!), I noticed a good percentage of attendees (including myself) were sitting barefoot. If you don’t like hippies, or prefer everyone wear appropriate footwear, GA may not be the place for you. 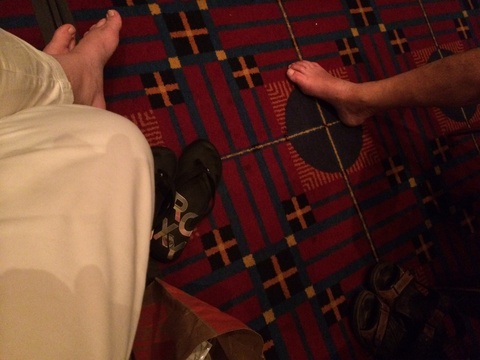 So many workshops. At every time slot, there are ten to fifteen options on topics ranging from the spiritual to social justice to ecology or writing, for example. You can really customize your GA experience depending on your primary interest in church life. If you're interested in many aspects of church life, deciding which ones to go to can really be a challenge.

7.   An amazing Ware Lecture. GA features a lineup of entertainment each night ranging from choir performances to dances to game nights. The showcase event happens Saturday night with a chosen "Ware Lecturer", a distinguished guest chosen to speak at the Assembly. This year’s lecturer was Dr. Cornel West. West is a prominent and provocative democratic intellectual. He has written nineteen books and edited thirteen books. He is best known for his classic Race Matters, published by Beacon Press in 1993. 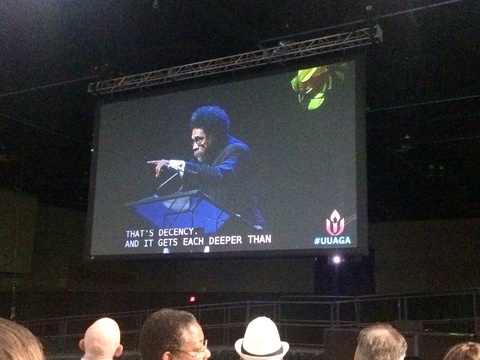 I might venture to say Dr. West was the most powerful speaker I’ve ever heard in my life. You can listen to the entire hair-raising speech here: https://www.youtube.com/watch?v=2iAHrgirE7I

(The Ware Lecturer at next year’s General Assembly in Columbus, Ohio will be Krista Tippett from the On Being radio program.)

6. Diversity. I was sharing stories with a woman from Durham, North Carolina. The woman, who formerly attended a Catholic church, said she left the church because she felt excluded and judged because she was not white (she was born in Colombia). I explained to her that I had come to the Unitarian Church first in 2008 when I was looking for a church my girlfriend and I could attend together. Different difference, same struggle for acceptance. Minorities of all races, genders, abilities, sexualities and classes were present at GA.

5. Ministries You Didn’t Know Existed. At the convention center, there was a space setup called “Exhibit Hall” where  groups and vendors of appeal were selling their wares and spreading information related to their respective causes. Here you could find ministries ranging from the Unitarian Universalist Animal Ministry to the Unitarian Universalists for Polyamory Awareness and everything in between.

4. So much music. I don't know about you, but the music was a large part of me coming back week after week when I first started attending First U. The music at GA didn't disappoint. Videos of many of the worship services are available here:

3. A super cool banner parade. Unitarian congregations from near and far waved their flags in the opening ceremony. Flags from congregations in every state and from as far away as the Philippines were displayed. You can watch the Opening ceremony here: http://www.uua.org/ga/virtual/2015 The banner parade begins at 43:30. (The interpretive dance piece beginning at 1:53:19 is worth watching as well.) 2. A lot of debate. In addition to workshops, worship, and fun evening entertainment, there is business to be conducted at GA. Delegates debate and vote on issues of importance in our Shared Vision as Unitarian Universalists. Among the movements made this year was the passage of a UUA Statement of Conscience affirming UU commitment to reproductive justice and an Action of Immediate Witness to support the Black Lives Matter movement.

1. A lot of love. There is something comforting about being surrounded by 3,000 people who are generally similar to you in mind, spirit and heart.We were excited to see each other when we ran into each other elsewhere in Portland. You'd see someone in a Standing On the Side of Love shirt in the street and just nod such as to say "Yes, hello, you are of my people." :) Over the course of the week, we laughed, we sang, we cried, we danced, we thought, we shared, we learned, and we grew. (And of course we had so much love to celebrate this year with the decision made by the Supreme Court to recognize same-sex marriage nationally being announced during the assembly) If you’re thinking about attending GA next year, I highly recommend it. If you have any questions or comments about this year’s General Assembly, you’re welcome to email me at Julia.bernd@gmail.com

I've been to 3 GAs (eons ago: '76 in Philadelphia, '91 in New Haven, ?? in Boston). Each was a spectacular stand-out experience for different reasons.

Get some friends together and GO!