Join us at 10pm on April 8 at the First Unitarian Church of Philadelphia for a Celebration of Life remembering Desiree Hines. THIS IS A CELEBRATION! Wear your happiest of spring colors and be prepared to party. 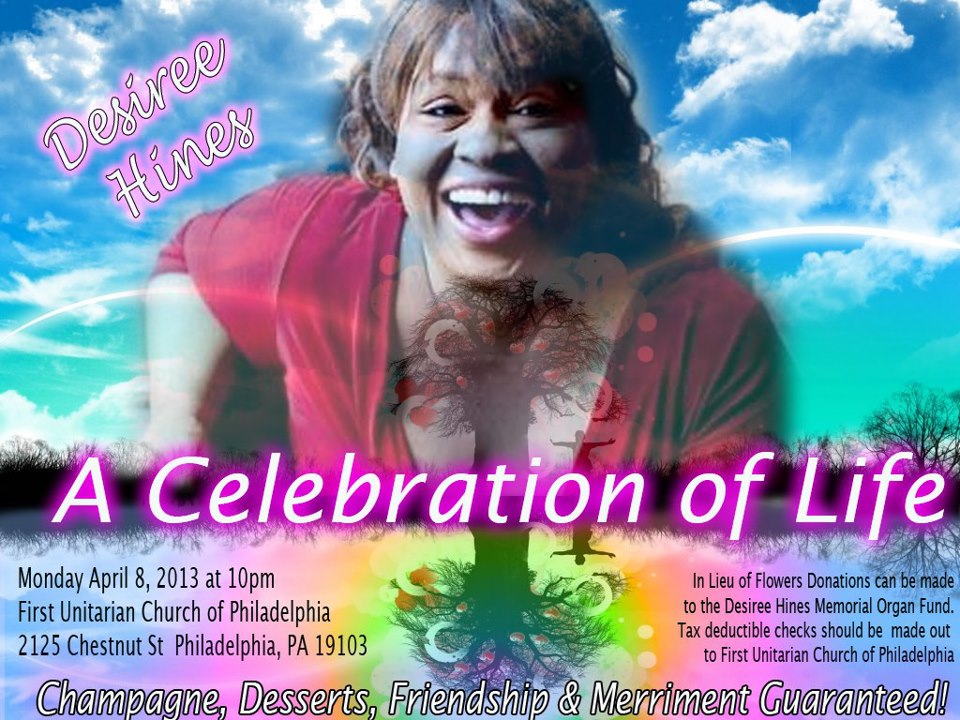 T. Desiree Hines, a former Philadelphian and renowned organist who pioneered the way for transgender inclusion in the classical-music world, died Jan. 19 after a battle with cancer. She was 33.

Hines was born in Jackson, Miss., and discovered her passion for music at a young age, working after-school jobs as a teen to afford lessons on the pipe organ.

She left Mississippi in 2001 to study at Pacific Lutheran University in Washington — and to be able to live freely as a woman, which wasn’t always possible in her hometown.

Hines faced institutionalized discrimination at the school, such as her appointment to a male dorm, and went on to leave the school and struggle with homelessness, living for months in a shelter in Chicago. But she overcame her obstacles by remaining committed to pursuing a career in music, studying in New York City before arriving in Philadelphia in 2006.

She took on work as a caterer and as manager of the subscription campaigns at the Kimmel Center and Wilma Theater, all while developing her craft as an organist.

She worked as the organist in residence, program coordinator and director of festivals at Traverse Arts Project from 2007-11.

TAP founder Mark Dahl met Hines during their work at Kimmel and was eager to bring her talent to his nonprofit arts organization.

Hines was the driving force behind TAP’s International GLBT Arts Festival that launched May 2009 and ran for two subsequent years.

Dahl said Hines was intent on the festival being inclusive.

“She had the idea for an LGBT artists festival and really wanted it to encompass all sorts of art mediums and the entire LGBT community, which was a huge feat,” Dahl said, noting that Hines accomplished that goal, with the inaugural festival offering 35 different types of performances showcasing all sectors of the LGBT community.

Hines secured a venue for the two-week festival and helped build four theaters inside the spot.

Dahl said her work on the festival and other pursuits was driven by her passion for advancing the work of LGBT artists, especially those who faced discrimination.

“She just had a fierce drive for equality, she couldn’t stand bigotry or inequality in any way,” he said.

Thom Cardwell, development director for the Philadelphia Cinema Alliance, met Hines shortly after she came to town, as she sought to immerse herself in the local LGBT arts community.

“She was unusual because she was an emerging artist herself, but she was always talking not just about her first love, music, but she really wanted a festival that included visual arts, dance, sculpture, performance arts, comedy, literature, poetry,” Cardwell said, adding that she was also invested in helping advance the younger community of artists. “She wanted to be a mentor to people. She had achieved certain accomplishments in her own music career and was hoping to achieve more, but it always touched me that she was always talking about younger artists, what they needed and that she wanted to see them succeed. She was very supportive of other artists in an unusual, unique way that we don’t always see in people with artistic temperaments.”

Hines also had an acumen for business, Cardwell said. She was especially successful at garnering new funding when getting TAP off the ground.

“She was a one-woman show. She’d say, ‘OK, we’re going to apply for the nonprofit tax-exempt status with the IRS and we’re going to get support from this foundation and get money from this group of business people,’” Cardwell said. “She’d come back from lunch with donors and say, ‘That went well. They took me to lunch and we got $3,000 from them.’ And I think that was because of her personality. She was so energetic, so passionate, so genuine, so driven. That was very catchy. People caught that fervor and fever she had.”

Hines also served on the boards of the Philadelphia Gay Tourism Caucus and The SafeGuards Project.

DVLF board chair D. Mark Mitchell met Hines when he was vice chair of the board and said she loved volunteering at the agency’s HEROES event, and was the best volunteer bartender at the annual TOY.

Mitchell said Hines was so committed to the local LGBT community because of the love that the community showed her during her time in Philadelphia.

“I think it was the acceptance that she found, being accepted into this community here,” he said. “Both of us were from the South, so that was something we would talk about and that was hard for her, but she found everyone here in Philadelphia so accepting of who she was. And that was easy to do because she was just bigger than life and let everyone know that as soon as she walked through the door.”

While Hines had a deep love and aptitude for Southern cooking — and would banter with Mitchell about whose macaroni and cheese recipe was superior — she was most well-known for her musical talent.

From 2007-11, she worked as the director of sacred music and organist at Holy Innocents St. Paul’s Episcopal Church.

Dahl said Hines, a member of the First Unitarian Church of Philadelphia, was let go from a number of former church organist positions when churches learned that she was trans — but that didn’t shake her faith.

“She was a black transsexual living in the Baptist-church world. She got fired from a lot of jobs but she had church music in her,” he said. “It sounds weird how someone could be so Christian but be in one of the most marginalized parts of society, but she was fiercely religious. She fought against bigotry every day, from the churches she worked in to just everywhere she went.”

And her work led to major inroads for trans musicians.

Hines was invited to perform as the soloist on the Kimmel Center’s Fred J. Cooper Memorial Organ at the venue’s 2008 Summer Solstice Celebration, which Dahl said was a major highlight in her musical career. She was also invited by LGBT Academy of Recording Arts to perform at the OUTMusic Awards in December 2010, the first time a classical musician was asked to participate.

She played alongside TAP’s annual screening of “Nosferatu,” improvising the score, which Dahl said illustrated her inborn talent.

“She could never really get the education she wanted because she had to keep switching schools, but she loved classical music and the pipe organ, and was brilliant at it,” he said. “She would play all day long, whether people were there to hear it or not; she just loved the instrument so much. And people loved her music and her talent.”

Hines moved to Kansas City, Mo., in 2011 to study at the University of Missouri.

She took on the role of staff organist at the Community of Christ Headquarters in Independence, Mo., and was appointed as the Isabel Curdy Endowed Organ Scholar at Grace and Holy Trinity Cathedral in Kansas City, the first African-American in that position.

In an interview with PGN shortly before she left the city, Hines expressed optimism for her future music career.

“Lately, I feel like I see myself three blocks ahead and I need to catch up. Just the other day I already got a call from a major concert hall. I think there are going to be a lot of good things coming my way,” she said. “I’m so blessed to have come to Philadelphia and get my feet wet, because everything that’s happened here has prepared me for the next stage of my career.”

When Hines was diagnosed with stage-four pancreatic neuroendocrine cancer shortly after the move, Dahl said she retained her optimistic outlook.

“I had no idea it was as serious as it was because of her attitude,” he said. “She was so positive, always.”

The Celebration of Life will be held on Monday evening, April 8, 2013 at 10 pm in the Sanctuary of the First Unitarian Church of Philadelphia, 2125 Chestnut Street, Philadelphia, PA 19103.

In lue of flowers please contribute to the T. Desiree Hines Memorial Organ Fund, payable to the First Unitarian Church.