"What a fascinating discovery! I knew I had seen this figure, in this pose before...but where? The Sistine Ceiling! Isaiah!

More details regarding the assessment as it becomes available! 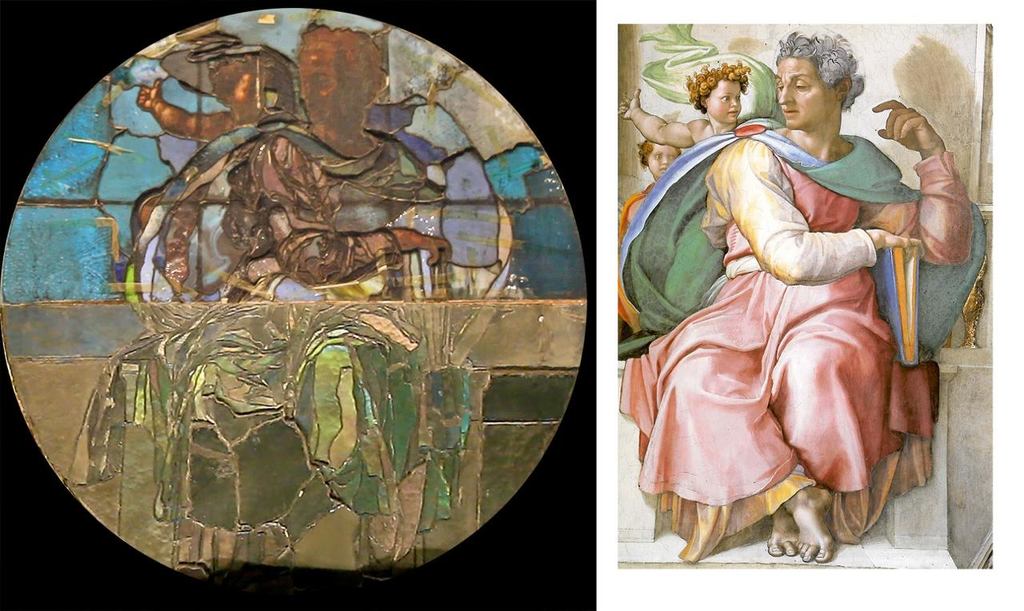 Last week some of the craftsmen from a Philadelphia stained glass studio came to First U to help us uncase and assess the LaFarge window, long missing from the Chestnut Street facade of the church. It was really exciting to have Joe Beyer and a few of his very skilled and knowledgeable colleagues uncover the treasure, which has been kept safely in a crate for about 20 years. The window is in two pieces, top and bottom halves. The top half has an image of God and of a cherub. After wiping away dust we could discern the painted faces. Joe recorded the uncasing and discussed what he was finding as it happened, and has plans to make a video that we can use to help find the money to repair the window and re-set it in the wall.

The window has large pieces of blue glass that surround the figures. The figures are made of much smaller pieces of glass all held together by molding and glue, which have decomposed over the years. It is apparent that much damage happened due to water infiltration before it was taken down, and that taking it down saved it from falling apart altogether. That said, Joe and his studio have the expertise and the desire to help us make this beautiful piece available once more. Due to its place over the street it would really make an impact not only on the sanctuary but also from the street and would be a great contribution to Philadelphia's public art. LaFarge has a piece on display at the Philadelphia Museum of Art, "Spring", that is considered a masterpiece.

We could go on and on about the beauty of his work, but mostly we're just thrilled that we have this treasure to share. All of our stained glass is impressive, take a moment to notice it all next time you are in the sanctuary.

Check out the Joe Beyer Studio at their website: http://www.beyerstudio.com/