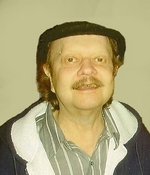 Mike was a loyal helper of Sexton Jim Devenney for over two decades. We found Mike to be hospitable, kind, generous and funny. On behalf of the entire 1stU family we will miss him very much.

Born in Germany, Michael was the son of the late Semen and Halyna Stojka Hawrylyschyn. He worked for many years as a truck driver for the Eagle Delivery Co. before illness forced him to retire.

Michael's family will greet friends on Wednesday at 10 AM. Requiem Services will be sung at 11 AM. Burial will follow at St. Mary's Ukrainian Catholic Cemetery, Elkins Park, PA.