Times Square is about to get a lot more crowded. I can tell that I have fully adopted my New York resident status because just writing those words made my left eye twitch. Normally, the thought of millions of people walking through Times Square would fill me with anxiety, frustration, and the urge to use a lot of four-letter words. But for one day, September 21, 2014, that thought fills me with hope, exhilaration, and the most powerful of four-letter words: love. On September 21, 2014, millions of people from around the nation will come to New York City for the first ever People’s Climate March. Taking place just two days before the United Nations Climate Summit, this march will be a chance for us to show the world that people from all walks of life see environmental justice as one of the most pressing issues of our time. And that is what makes this movement even more spectacular. The People’s Climate March is a “movement of movements,” which means it does not have one single body making decisions for all participants. Instead, hundreds of organizations are working together to create a collaborative justice movement that emphasizes how climate change impacts every single person and community. It is an issue that intersects with racial justice, economic justice, food security, immigration, women’s health, childhood development, and so much more. The reality is that all of these issues and concerns occur within our environmental setting, and when that suffers, so do every single one of our efforts for healing and justice. The environmental harms and other disastrous effects of climate change are already impacting people’s lives all around the world, and without a united front and focus on climate change, everything else we try to achieve will never be fully successful. 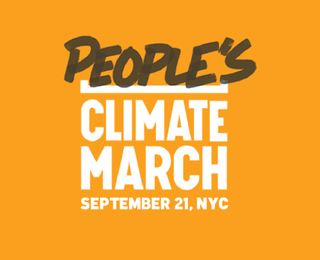 This movement of movements, recognizing the intersections of all our lives and struggles, is right up our Unitarian Universalist alley. As noted in our principles, we are a religious movement that seeks to respect the interdependent web of all existence. This web consists not only of our environmental surroundings, but also includes the people around the world who are all part of our one, gloriously diverse human family. And our web, the web that created us, everything, and everyone around us…it is being systematically destroyed. We all feel its impact, and some of us unjustly bear the brunt of this destruction. I am pretty sure we have a few more principles that speak to that inequitable distribution of suffering and harm. As Unitarian Universalists – as people of reason, hope, and compassion – now is the time for us to live into our principles and faith. Now is the time for us to join millions of others and become part of the harmonious chorus of voices for justice and universal change. Now is the time for us to recognize the critical role we must play in order to address the human and environmental costs of this global crisis. 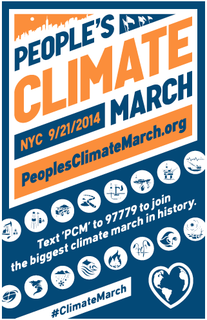 I am overjoyed by the number of Unitarian Universalists from around the country who are mobilizing to come to the march in September. As members and friends of the First Unitarian Church of Philadelphia, most of us less than two hours away from New York City, we have an opportunity to join them and be a part of the largest climate march in history. Organize a carpool, buy a bus ticket, or heck, ride your bike! Worship with your feet that Sunday and be a part of the march that brings all our voices and movements together. Clarence Skinner once wrote that Universalism is "the religion of the people, for the people, by the people." Well, the People's Climate March is no different. It is a movement of the people, for the people, by the people. And to make a truly universal impact, it needs to have universal involvement. Or, as the march motto goes, “to change everything, we need everyone on board.”

Watch this video to learn more about the People’s Climate March.

Register for the Climate March.

Join the UU Climate March Group for updates on the march and surrounding events.