In my last post, I promised to explain why the iron gates have been removed from the south porch.  The short answer is that some masonry repairs could not be done with them in place.  Of course, if were that simple there would be little to write about!  Read on to learn more about some of the complications we encountered. 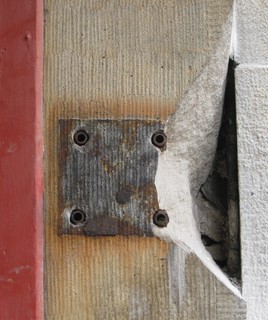 This spall was located behind the upper hinge plate on the east-facing gate.  The bolts holding the gate to the wall went into iron inserts.  They had rusted and expanded; the resulting force cracked the stone.

Realizing that two new anchors would go right through the repaired area, which would be weaker than solid stone, we brought in a structural engineer tell us how to install them so that the weight of the gate would be supported properly. 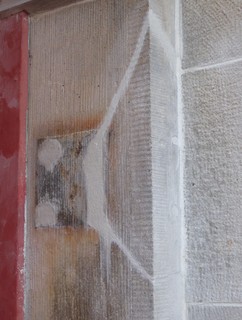 At left, you can see that all four iron inserts were drilled out and the resulting holes were packed with mortar.

Fortunately, the broken off piece of stone had been held in place by the gate hinge.  The masons were able to pin it back into place.  Can you spot the location of the pins?

The joints between the pinned stone and the walls were also pointed.  All that remains to be done is to insert stainless steel threaded rods into the wall, and then bolt the gate back in place.

These two images show another repair at the east-facing gate.  The iron lock hasp had rusted and cracked to stone.  Luckily, it was a flat piece which came out of the wall relatively easily.

The hole and cracks have now been patched.  A new stainless steel hasp will be installed when the gate is re-hung.

Moving on to more complicated repairs, let's look at the bottom hinge of a gate. 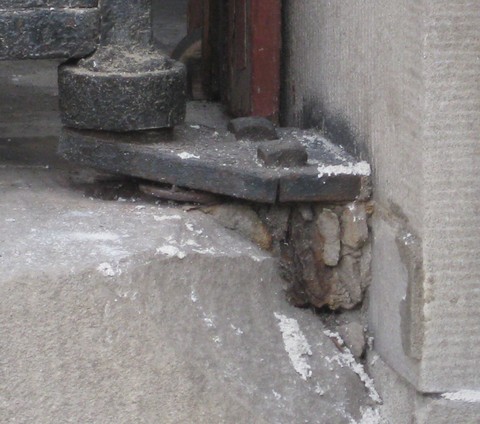 The round end of the gate pivots on a shoe plate which is bolted to the stone underneath.

In this example, the shoe plate is cracked and angles upwards.  Someone wedged a washer under it sometime in the past.  The gap underneath let water in and the bolts rusted, cracking a large chuck of stone loose.

Two of the south-facing gates have this type of damage. After removing the gate, the broken stone under the hinge was cut away.  A new blocks of stone will be pinned and mortared in place (a Dutchman repair).

When the gates came off to do this work, we found the following unpleasant surprises. 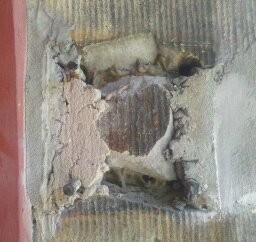 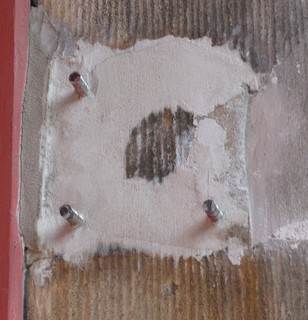 Upper hinge plates of the south-facing gates were hiding less than ideal past repairs--unfilled voids and incompletely anchored stainless steel bolts (left).  These problems have been corrected (right). Instead of looking like the one at left, the lower hinge pins of several gates were worn (like the one on the right) or broken.  The gates are in the metal shop to be repaired.  New shoe plates are also being fabricated.

Once the Dutchman repairs and metalwork are finished, the new shoe plates will be installed.  Then the gates will be bolted back on the building.

You might have notice that the iron gates would benefit from a new paint job.   We have a great opportunity to strip, prime and paint them while they are off the building.  The Property Ministry Team is looking into the cost, in hopes that funds can be found.

Comment by CAROL JESSUP on July 24, 2011 at 12:47am
Great blog- again you make complex issues easier to understand - and the photos are very illuminating - thanks so much