In previous posts, I described how all of the joints were re-pointed and all existing and incipient spalls were repaired. In my last post, I described various repairs associated with the iron gates.  In this update, I will show you the final bits of work which were completed this fall.

Let's start with this window arch, in which three of the stones had dropped down out of alignment. 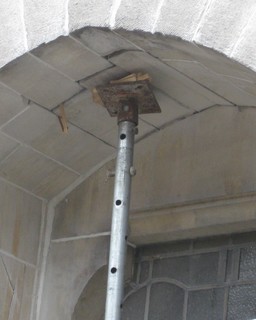 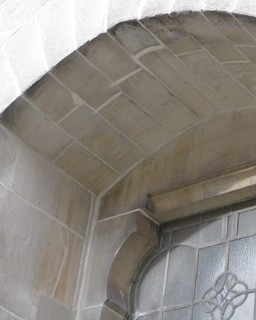 The joints of the surrounding stones were re-pointed first.  Then, the metal jack was raised bit by bit over many days until the stones were back in position.  Next, each of the three stones was anchored to the one above it with a stainless steel pin.  Then, the last joints were pointed.  The jack was finally removed when the mortar had dried completely.  The end result is shown above at right.

Let's move now to the south-facing steps.  As you may recall, two of the stone steps were badly cracked underneath the gate hinges.  Several of the gates' shoe plates and bottom pivots were also damaged.  All of that has now been repaired. 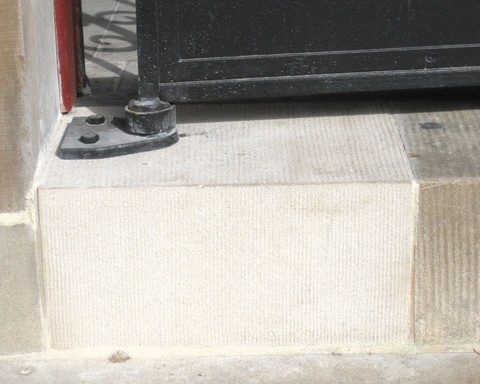 At left you can see a Dutchman repair where the damaged area was cut away and replaced with a new block of stone.

One of the new shoe plates is also clearly visible.  Those bolts are painted stainless steel, and will cause no future damage by rusting (unlike the ones they replace!)

Although you cannot see the repair to the bottom pivot, you can feel it in the easy, almost frictionless swing of the gate.

While the gates were off the building for repairs, we took the opportunity to have them all sandblasted and powder-coated.  At left is a closeup of the peeling paint beforehand, and at right is a view of the new durable, attractive finish. 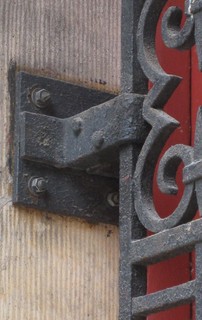 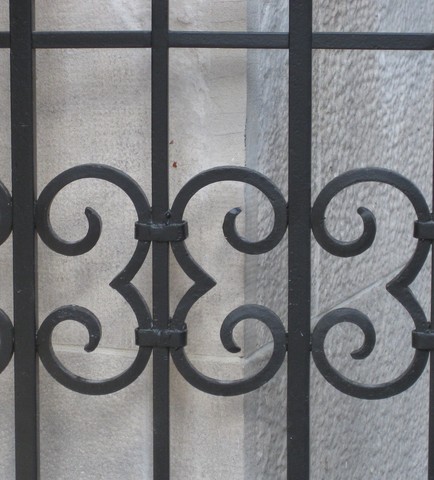 Let's move now to the east side of the porch.  The gate there has been re-hung over the repaired spall behind the hinge (left).  Two Dutchman repairs on the steps (right) now replace the old concrete patches. 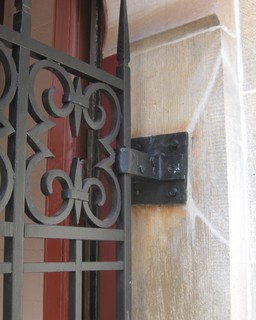 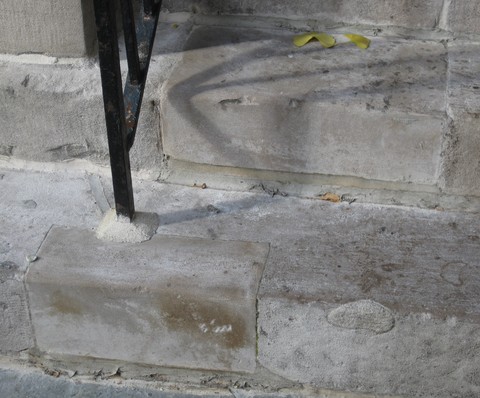 Let's step back now for a broader view of the porch.  It looks pretty good, doesn't it? One thing still remains to be done.  When the weather warms up in the spring, the exterior walls of the porch will be cleaned.  Once the rust stains and a century's worth of atmospheric soiling have been removed, the masonry joints and visible spall repairs will blend with the surrounding stone and practically disappear.   At that point, a series of projects stretching over seven years will have completely transformed our front entrance porch!

Remembering the “old” porch with it's spalls, peeling white paint and broken 60's style globe lights, I am thrilled with what the church has accomplished so far. At the same time, I am aware that this is but one step in a much larger process. The masonry work on the rest of the building remains to be done. The plans are in place and the masons are ready to begin work as soon as funding becomes available.

very interesting. Thanks for the photos and the clear explanations.

What an interesting and informative description of this work.  Thank you Lora.

Comment by CAROL JESSUP on January 12, 2012 at 11:02pm
Lora - great blog, great work - many thanks for your efforts and congratulations!!!

Thanks for all the dedicated and caring efforts to get this accomplished!!!!