It should come as no surprise that I love to worship. In the broadest of terms, worship connects us to something greater than our individual selves. It is the process through which we celebrate and commit ourselves to the infinite, evolving, and interdependent relationships that our faith brings to light. It is the means through which our values are reaffirmed, our spirits are nourished, our minds are challenged, and our hearts are opened. The way that I see it, worship is the inextricable action that is the embodiment of faith.

As a Unitarian Universalist, my worship, my embodied faith, is not easy or convenient. It demands commitment and sacrifice; it requires the courage to take risks; it encourages individual vulnerability for the sake of collective power and growth. When I worship, it is not simply to be changed or inspired. It is to bring change, to complete the observance of my faith by putting it into action with the people around me. On February 8, 2014, I worshipped with 100,000 people in the streets of Raleigh, North Carolina. There were no pews and there was no order of service. Most of us did not know each other, and many of us were not even from the same state. Most importantly, we weren’t there to hear a message. We were there to be the message. We were there to say that we were no longer going to let systems of immorality dominate our society. When I first heard of the “Moral Mondays” movement, I had no idea what it meant. But when I started to see more and more publicity around the “Moral March” in February, I knew I could no longer ignore the magnitude of what was happening. People across the state of North Carolina were coming together every single week, and demanding change…for everyone. This was not a single-issue movement, no “our problems are bigger than your problems” campaign. Moral Mondays was a movement for everyone who was experiencing the crushing weight of political, economic, social, and/or legal injustice. It was a movement for women’s healthcare, education, labor rights, marriage equality, voting rights, labor rights, immigration, criminal justice reform, and the list goes on. Moral Mondays was, and continues to be, the social change movement that believes we can all reach that “higher ground,” where equality, dignity, love, and life are no longer denied to any person. The Moral Mondays movement brings people from all walks of life together who share a common goal – to end injustice. And joining that movement, marching in the biggest show of collective power since the Selma to Montgomery marches in 1965, I heard the words of Rev. Jay Leach echoing through my mind: “We are a part of something much bigger than our own preferences.” I felt my spirit reach new heights as I heard the leader of the Moral Mondays movement, Rev. William Barber, remind us that “we is the most important word in the justice vocabulary.”

That Saturday, I did not just march through the streets of Raleigh. I worshipped in them. And today, we have an opportunity to keep on worshipping. Today, we have an opportunity to come together as people with immense power and a commitment to bring change. We have an opportunity not just to hear a message in our worship, but to be the message in our worship. The injustices occurring in North Carolina may be extreme, but they are no isolated matter. Here in Pennsylvania, we face a similar repulsive arrangement of unjust laws and budgetary decisions that deny equality, dignity, love, and life to citizens across the state. But we do not have to keep it that way. We too can come together, unite in our common goal to bring an end to systems of immorality, claim our collective power. We too can be a part of the movement towards that higher ground. 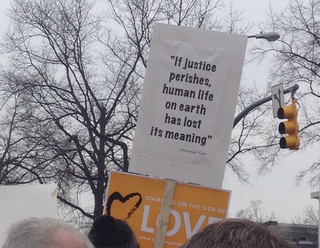